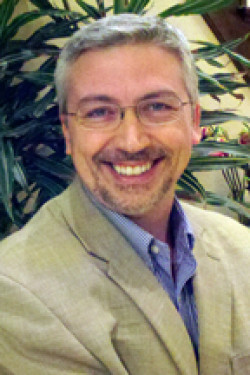 Professor Di Ventra has made major contributions to several areas of nanotechnology and condensed matter theory:

Massimiliano Di Ventra obtained his undergraduate degree in Physics from the University of Trieste (Italy) in 1991 and did his PhD studies at the Swiss Federal Institute of Technology in Lausanne in 1993-1997. He is now professor of Physics at the University of California, San Diego. Di Ventra's research interests are in condensed-matter theory and unconventional computing. He has been invited to deliver more than 300 talks worldwide on these topics, including 15 plenary/keynote presentations. He has published more than 200 papers in refereed journals (he was named 2018 Highly Cited Researcher by Clarivate Analytics), has 4 granted patents, co-edited the textbook Introduction to Nanoscale Science and Technology (Springer, 2004) for undergraduate students, he is single author of the graduate-level textbook Electrical Transport in Nanoscale Systems (Cambridge University Press, 2008), and of the trade book The Scientific Method: Reflections from a Practitioner (Oxford University Press, 2018). He is a fellow of the American Physical Society, the Institute of Physics, and foreign member of the Academia Europaea. He is the co-founder of MemComputing, Inc.

About the Foresight Institute

Foresight Institute advances technologies of fundamental importance to the long-term future of life and the biosphere focusing on molecular machine nanotechnology, biotechnology, and computer science. We reward excellence, restrain recklessness, and create community to promote beneficial uses of these technologies and reduce misuse and accidents potentially associated with them.