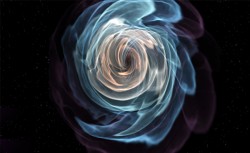 The gravitational signal, named GW170817, was first detected on August 17 at 8:41 am EDT by two identical Laser Interferometer Gravitational-Wave Observatory (LIGO) detectors, one located in Hanford, Washington, and one in Livingston, Louisiana.

The information provided by the third detector, Virgo, situated near Pisa, Italy, enabled an improvement in localizing the cosmic event.

“This discovery realizes a long-standing goal many of us have had to simultaneously observe rare cosmic events using both traditional and gravitational-wave observatories,” says France A. Córdova, director of the National Science Foundation (NSF). “Decades-long investments in gravitational-wave observatories and telescopes enable us to detect new cosmic phenomena and piece together a fresh narrative of the physics of stars in their death throes.”

Each LIGO observatory consists of two long tunnels arranged in an L shape, at the joint of which a laser beam is split in two. Light is sent down the length of each tunnel, then reflected in the direction it came from by a suspended mirror.

Opening a new era in astronomy

As these neutron stars spiraled together, they emitted gravitational waves that were detectable for about 100 seconds. When they collided, a flash of light in the form of gamma rays was emitted and seen on Earth about two seconds after the gravitational waves.

In the days and weeks following the smashup, other forms of light, or electromagnetic radiation — including X-ray, ultraviolet, optical, infrared, and radio waves — were detected.

On August 17, LIGO’s real-time data analysis software caught a strong signal of gravitational waves from space in one of the two LIGO detectors. At nearly the same time, the Gamma-ray Burst Monitor on NASA’s Fermi space telescope had detected a burst of gamma rays.

LIGO-Virgo analysis software put the two signals together and saw it was highly unlikely to be a chance coincidence, and another automated LIGO analysis indicated that there was a coincident gravitational wave signal in the other LIGO detector.

Rapid gravitational-wave detection by the LIGO-Virgo team, coupled with Fermi’s gamma-ray detection, enabled the launch of follow-up by telescopes around the world.

The collaboration between LIGO and Virgo determine the statistical significance of detected waves on OSG. This is done via the pyCBC pipeline that uses Pegasus and HTCondor as part of its implementation, notes Peter F. Couvares of the LIGO Laboratory at Caltech.

While binary black holes produce 'chirps' lasting a fraction of a second in the LIGO detector’s sensitive band, the August 17 chirp lasted approximately 100 seconds and was seen through the entire frequency range of LIGO — about the same range as common musical instruments. Scientists could identify the chirp source as objects that were much less massive than the black holes seen to date.

“It immediately appeared to us the source was likely to be neutron stars, the other coveted source we were hoping to see — and promising the world we would see,” says David Shoemaker, spokesperson for the LIGO Scientific Collaboration and senior research scientist in the Massachusetts Institute of Technology’s Kavli Institute for Astrophysics and Space Research.

“From informing detailed models of the inner workings of neutron stars and the emissions they produce, to more fundamental physics such as general relativity, this event is just so rich. It is a gift that will keep on giving.”

LIGO is funded by the NSF, and operated by Caltech and MIT, which conceived of LIGO and led the Initial and Advanced LIGO projects. Financial support for the Advanced LIGO project was led by the NSF with Germany (Max Planck Society), the U.K. (Science and Technology Facilities Council) and Australia (Australian Research Council) making significant commitments and contributions to the project.

More than 1,200 scientists and some 100 institutions from around the world participate in the effort through the LIGO Scientific Collaboration, which includes the GEO Collaboration and the Australian collaboration OzGrav. Additional partners are listed at http://ligo.org/partners.php

The Virgo collaboration consists of more than 280 physicists and engineers belonging to 20 different European research groups: six from Centre National de la Recherche Scientifique (CNRS)  in France; eight from the Istituto Nazionale di Fisica Nucleare (INFN) in Italy; two in the Netherlands with Nikhef; the MTA Wigner RCP in Hungary; the POLGRAW group in Poland; Spain with the University of Valencia; and the European Gravitational Observatory, EGO, the laboratory hosting the Virgo detector near Pisa in Italy, funded by CNRS, INFN, and Nikhef.