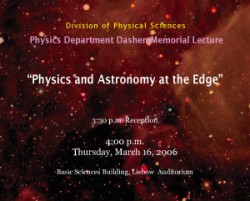 Professor Frank H. Shu is one of the world's leading authorities in theoretical astrophysics and star formation. He is known for his pioneering theoretical work in a diverse set of fields, including the origin of meteorites, the birth and early evolution of stars, the process of mass transfer in close binary stars, and the structure of spiral galaxies.

Dr. Shu was President of the National Tsing Hua University in 2002-2004. Prior to that, he was on the faculty at UC Berkeley and served as a UC University Professor.
He is a current member of the National Academy of Sciences, the American Academy of Arts and Sciences, the American Philosophical Society, and the Academia Sinica in Taiwan. He was the Oort Professor of Leiden University in 1996, and has an asteroid "Frank Shu" named after him.